Graduate in Psychology with mention in Health Psychology and Intervention in Mental and Behavioral Disorders by the UNED. 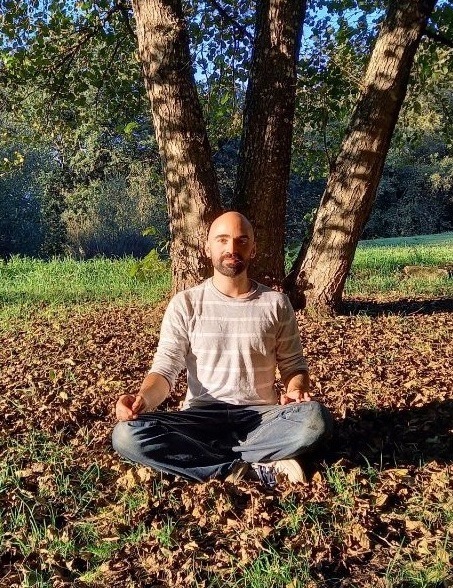 I chose to become a therapist because I like to help people. To help them deeply, to find unconditional harmony in themselves and to be able to live from freedom.

I have been trained and have drawn from different sources in order to have a more comprehensive vision and more tools to accompany. Especially I have deepened in Transpersonal and Humanistic Psychology, Enneagram, meditation and expanded states of consciousness (natural and induced).

The longing I have always felt to develop as a human being has also allowed me to become more conscious, with the numerous meditation retreats and the enrichment through the experiences and people I have met in the more than fifty countries I have traveled to.

Key have been expanded states of consciousness through ecstasy dance and substance-assisted therapy in California or Switzerland, with sacred plants in the Amazon and Europe, fasting, workshops, and daily spiritual practice.

For the last ten years I have dabbled in psychotherapy, as part of the Psychosocial Emergency Immediate Response Team (Red Cross, 2012-2017), collaborating in meditation retreats (Vipassana Foundation, since 2012), in entheogen-assisted psychotherapy (since 2013) and volunteering in India (2013) and Peru (2015).

THE ESSENCE OF THE SOUL © 2021 ALL RIGHTS RESERVED